Update: October 8, 2018 – Google has announce it will be shutting down it’s G+ social platform.

What I’ll call the “Great Google Convergence” continued yesterday as Google announced that they would be merging their Google+ (G+) data into personalized search results (aka Search, Plus Your World).

On the surface, this appears to be a desperate play by Google to make sure its social networking experiment, G+, gains more traction.

However, I don’t think Google is desperate at all—and this isn’t just about their social network. Google knows exactly what they’re doing with G+: I think they’re using it to unify their products, get people dependent on the Google Bar without even realizing it and, of course, change the way people find information in Search. And most importantly, all of this gives Google data.

(Update 1 – January 24th, 2012: Google CEO, Larry Page, was quoted saying: “This is the path we’re headed down – a single unified, beautiful product across everything.”)

What G+ solves for Google Products

Let’s start with Google’s products. Chrome OS was an experiment to see if users could survive—thrive even—in a browser-only environment. The experiment required that all of the tools you would need would be browser accessible. Google has been very busy creating and promoting those tools. If you have any doubt about that, take a quick glance at today’s list of Google products (they have been culling the list, but what’s left is still impressive): 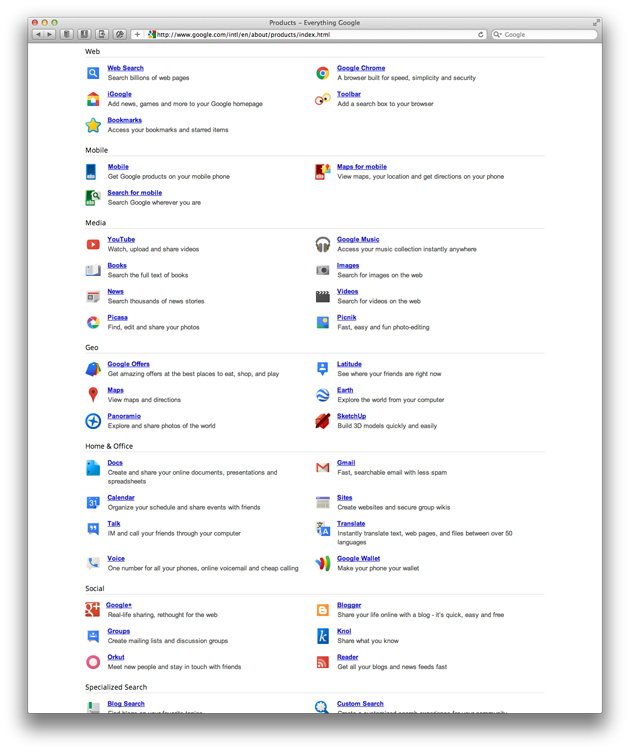 The only problem has been the lack of visual unification of Google products, and the stealing of page views, advertising revenue and time from rivals like Facebook. That’s where the Google Bar and G+ come in.

Now, when you’re logged in to Google, you’re using the Google Bar by default any time that you’re using a Google product. For example, here’s what it looks like when I’m in Google Docs:

At first, the Google Bar seemed like a simple UI change. But when G+ was released, not only could your main social network be easy to access via the Google Bar, you could conduct all of your business without leaving the Google ecosystem.

If you have a Google account, which millions of people do, then it’s only a matter of time until people start interacting and using G+. The Google Bar makes it too easy not to.

That gives Google a tremendous advantage for business, entertainment and social life online—and some are already saying it’s an unfair one.

What G+ solves for Google Search

G+ also solves Google’s very big problem of trust and authority for content that’s served in their SERPs. Before Google Profiles and their push for connecting authors with the content they’ve written, they had to rely solely on “low confidence” data to determine trust and authority and hope for the best.

They can then use this “high confidence” data to determine the best content to present in their SERPs. For example, if trusted and authoritative G+ users +1 an article that’s connected to a Google profile, the author’s profile should increase in trust and authority, and the content should perform better in the SERPs.

These scenarios all work systemically, where every G+ action automatically affects every related profile and +1’d content.

So what does this all mean for SEO?

It means a lot is changing, but a lot is also staying the same.

How the merging of G+ data into SERPs will impact SEO

SEOs are an opportunistic bunch, so the first thing I expect to see are attempts to exploit it. For example, some will come to the conclusion that they’ll be able to win the SERPs battle by building immense circles around multiple profiles. A lot of time will be wasted doing this. The problem is that Google has already thought of this.

With G+, the new PageRank is something I like to call Google Profile Authority or GPA. Achieving a high GPA won’t come from building giant networks (circles) full of weak profiles. Also, building an enormous network of friends will most likely be full of people (some fake) that have irrelevant interests and they won’t come close to the 99.9% of other people outside your network that will be searching.

The best approach to GPA is to consider what the G+ changes will actually do.

Keeping those things in mind, here are my suggestions for approaching SEO in a G+ world.

Bottom line, if you want to be as visible as possible on Google, you will have to immerse yourself into their social ecosystem. What hasn’t changed is creating good content and fostering meaningful online relationships.