Papa Roux, a little Cajun place on the east side of Indianapolis, isn’t a restaurant you would have heard of if you’re not from the area.

That is, before it went viral.

You may have heard the story along with the rest of the world: In snowy February, Papa Roux owner Art Bouvier spotted teenager Jhaqueil Reagan walking to a job interview miles away. Art was so impressed with Jhaqueil’s work ethic that he hired him on the spot for a job at Papa Roux.

When he posted about the incident on Papa Roux’s Facebook page, the story garnered thousands of shares and a life of its own. Art and Jhaqueil went on Good Morning America, Fox & Friends and more, and Papa Roux got press from local outlets all the way to Huffington Post to as far away as the UK’s Daily Mail.

As a friend of Art’s, I sometimes help out with the restaurant’s social media and web marketing questions in exchange for some po-boys and bread pudding.

But none of the “Roux Crew” were prepared for this.

Now that the media frenzy and non-stop lines at the restaurant are becoming more manageable, we’re finally able to look back and think about what we learned over the last few weeks during all of this effort.

From someone who’s been there, here are some tips on being prepared to go viral – and for what comes after your moment in the spotlight.

Nobody on the “planning committee” saw this one coming. There’s no way we could have been. Staffing wasn’t in place at the restaurant level or the marketing level to handle the exponential growth in business and activity.

To try to be prepared for what truly can’t really be prepared for, have wild dreams every now and then. Think to yourself what you would do if the amazing took place. How would you handle it? If you needed to double your staff or production overnight; how would you do it? 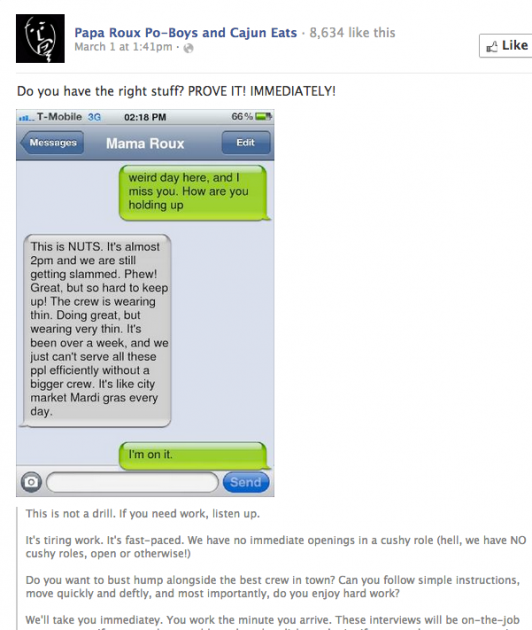 If as a business owner, you suddenly started receiving more than 5,000 emails and dozens of interview requests a day, could your business keep chugging along? Could your family live without you for a week because you were either gone or too exhausted to be much of a help to anyone when you were around?

The Papa Roux Po-Boys and Cajun Eats Fan Page reached just shy of 1.7 million people at the height of the viral storm. Even today, it gets more than 70 times the “normal” reach it did before all of this occurred.

If your social media accounts suddenly lit up, if people from all over the world (in every time zone!) suddenly had questions for you, could you respond to them efficiently and in a timely manner?

How many page admins do you have? If you needed to add five more in a hurry, could you find the right people?

How could you keep a consistent voice in your responses? How could you accurately keep track of who responded to what, when and with what? How could you make sure your boss was in agreement with all of it?

Believe in your team

Do have people around you that you trust? You’re going to need them to keep you on track. 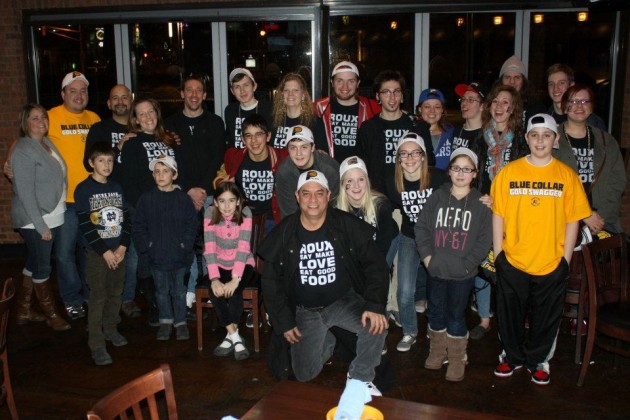 You can’t please everyone. Don’t lose sleep over not being able to make them happy when they’re never going to be. Do what you do. Be true to yourself. Keep moving.

Today, Papa Roux has reached its “new normal.” Business is still going strong – and up over previous months and years.

So what’s next? Fade back into comfortable obscurity, or take advantage of the opportunity to become a better business? We wanted to be better.

The big theme of Art and Jhaqueil’s story seemed to be “pay it forward.” The mantra kept surfacing from the stories we saw shared on the fan page.

There are “fans” of Papa Roux on Facebook that may never step foot in the restaurant. How do we keep them engaged? By sharing their stories, and encouraging them to find their own Papa Roux moment and pay it forward.

We’re starting to sell T-shirts now, both as a reminder of the “pay it forward” mantra and to raise money for a new non-profit organization set up to give underprivileged people the tools and resources they require for gainful employment.

Community is the foundation

Although it might appear otherwise, this didn’t happen overnight. Art has been working on his network day-by-day every day for years.

His regular and consistent work to engage a network and attract fans one-by-one is what it takes to build a community, and community is the way something big can happen.

10 Responses to “What happens AFTER you go viral?”