Majestic recently updated their algorithm to display 301 redirects for referring domains. Raven has also updated the Backlink Explorer to support displaying this new data. To view it, check the table display options for Indirect Target URL and Indirect Target Type. 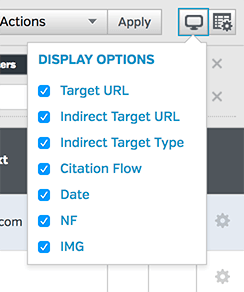 The table results will then display the new data columns.

I wanted to learn more about how this change affects digital marketers, so I reached out to Dixon Jones to interview him about it. You can listen to the interview or read the transcript below.

Transcript of Interview with Dixon Jones

Dixon Jones: Hello, Jon, how are you?

DJ: Yeah, I’ll come out and see you again soon, I promise.

JH: Hopefully at PubCon or something, who knows.

JH: Whatever the next event is.

JH: So how long have we been partners with you? It’s been a pretty long time.

DJ: You were one of the first full partners that we had if not the first. You’re certainly in the top three, so it must’ve been 2009, because that’s when we started doing partnership deals I think. Yeah, so it’s what, seven, eight years now.

JH: Well one of the, or maybe the main reason I’m talking to you today is Majestic has a pretty big update that’s just been launched that I know you’re excited about, and I wanted to hear more about it.

DJ: Yeah, so what we’ve done–in a way it’s a very subtle update but in terms of being able to use Majestic I think it takes on leaps and bounds. So what we’ve done is worked out and been able to map properly explicit 301 redirects between websites. So let me explain what that means. I’m sure you get it, but if I don’t explain it I’ll get it wrong next time I explain it. So, if a website links through from page A to page B and that one’s on a different website, through a 301 redirect, what we used to do before is show you one link from page A to page B. So you could have 100 pages linking to page A. That 301 redirects to page B on a different domain, and we don’t pick it out as one link. So now we pick up all the links. A good example of that is sites that have changed their domain … And Majestic’s one of them, ’cause back in the day we were called Majesticseo.com. So when we redirected to Majestic.com all of our links … Sorry, when we started Majestic.com we suddenly had one really powerful link coming from Majesticseo.com because we couldn’t show people all the links to Majesticseo.com unless you looked at Majesticseo.com. And now we include them all, we show them all, and we add those numbers together. So we’re seeing what Google does much more than what we did before.

JH: Okay. That’s really interesting because, as you talk about it, I have even other ideas of how I might use it and one of the things that comes to mind is with affiliate links. So for example, ShareASale typically uses their own link and so most affiliate people will link using a URL shortener or some sort of redirect which ShareASale then redirects to the destination site-

JH: So it sounds like with this change, you’re gonna be able to see who is linking to you even if they’re using an intermediary.

DJ: Yeah, as long as it’s using a 301, then I reckon it will. So yeah, Affiliate Window used to do that, is when [inaudible 00:03:14] awin1.com. So yeah now all of those links should in theory, if they’re 30,1 which you hope they do if they’re doing SEO right, then you’d be able to pick those up. That’s a brilliant new — I should have looked about that one, thanks Jon.

JH: Too late, I’m gonna blog about it.

JH: Exactly, I will. I will check. The other thing if you take that one step further it sounds like then people could also do competitive research, because you could actually now look up the backlinks for your competitors and see people who are linking to them that are using affiliate programs.

JH: And then you have an opportunity there ’cause you know that person is really an affiliate marketer, and if you have an affiliate program you can approach them and say, “Hey, what about promoting us instead of in addition?”

DJ: Yeah, and it also will, on top of the affiliate programs, make some of the perhaps not so clever link networks exposed as well, because if they’re putting all their links through a 301 to try and hide all the links from Majestic, then we’re gonna see those now if they’re 301. They can still block them, they can still do things if they want to hide those, but it’ll expose some of those as well.

JH: So it’s great for the competitors that you’re looking at; it’s not great if you’re the one doing it also, because somebody’s looking at yours.

DJ: If you want to hide the links, you’ve just got to be a bit more clever. You can still get that, but yeah. I think it’s gonna be useful for your own sites a lot as well. I got a guy on the blog who had said, “Yeah, but now when I see my list, I’ve got a whole load of spammy links coming in with weird anchor texts and stuff. Can I filter those out of my list?” And that is damned if you do, damned if you don’t. People were screaming to have this kind of functionality and now they want to take it out. But what it does is it tells him exactly what Google’s seeing. So if we’re seeing a whole load of spammy anchor texts coming in all of a sudden through 301 redirects then those spammy anchor texts are coming in through 301 redirects. So you can export the data or filter it I’m sure but … Yeah. We’re just getting closer to what Google sees in real life.

JH: I think that’s great. So is this live or is it going live in the future?

DJ: Yeah, no, it’s live now. It’s up, it’s running, and you can use it now. In fact you can’t not use it now because it’s built into the numbers. So some websites will find they’ve got a big bump in their back link counts, and they tend to be the websites that have had those kind of 301 redirects on them-

JH: So part of the feature is you cannot not use it.

DJ: Yeah, we’ve just found a whole load of other links, which we did have in the system, but we couldn’t surface them for you, so now we’ve been able to surface them better, so-

JH: Oh, so that’s a really good point, what you just said, which is, so one of the things that people may not realize is a lot of sites are most likely gonna see a big bump in their backlinks and it’s not necessarily that they’re new backlinks, it’s just that now you can discover them better because of this new feature.

DJ: Yeah, absolutely. And there’s also some of the websites that will see no difference at all because they weren’t doing SEO, they weren’t manipulating 301 redirects and that sort of thing. I think there’s also another caveat I’ve gotta say, is this doesn’t count links inside websites as well. We haven’t sussed out dub-dub-dub going to non-dub-dub-dub for example. That one, you’ve got to look at both those different pages or domains. But these are really redirects between different websites. And that includes some URL shorteners as well, so that’s kind of interesting ’cause it’s playing with some URL shorteners which may be another use for it.

JH: Yeah, no, I can’t wait to start playing around with it. And then for the listeners who use Raven, this is a view that we’re going to be adding very soon.

JH: So look out for that and in fact probably by the time people hear this and it’s on our blog, it’ll be live.

DJ: Fantastic. Well when it does make sure I Tweet it.

JH: I will. I’ll make sure you know so you will Tweet it.

JH: Thank you. Alright. Hey Dixon, it was great talking with you and congrats on the new feature.

Learn About Our SERP Rank Tracker

We wanted to provide the most flexible rank checking to our users, so we let you control how frequently we check the SERPs for changes to your ranking.