It’s hard to be an email marketer.

Copywriters have to grab attention in cluttered inboxes with original-yet-proven-to-work subject lines. Designers have to keep attention despite compatibility issues that take coding right back to 1998.

And when major retailers have to start sending campaigns like this, you know those new Gmail tabs are really making life miserable for email marketers.

So it’s understandable that email marketers want to try something that seems fresh and fun. Something that people like. You know, something like animated GIFs. 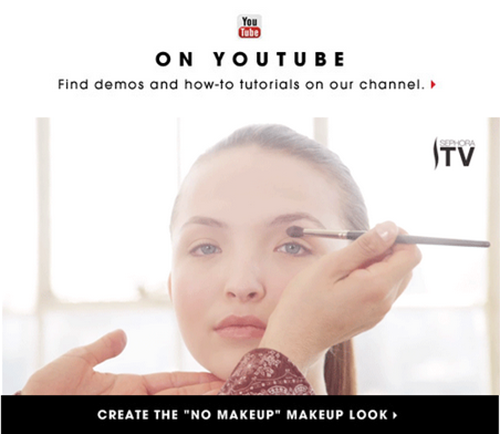 …why shouldn’t everyone else?

Here are three good reasons why not to use animated GIFs in emails:

The first person to use an animated GIF in an email marketing campaign was original. (Maybe.)

The next 50 people to use an animated GIF in an email marketing campaign probably thought they were doing something original.

The next 5,000 people to use an animated GIF in an email marketing campaign were just hopping on the trendy bandwagon.

You know what else is/was trendy? Powdered wigs. Jello-O salad. Saying “groovy.” Drop shadows and beveled edges and rounded corners in graphic design. You get the point. It won’t be long before this new technique loses its trendy appeal as tastes change. Best case, it gets quaint, like “groovy.” Worst case, it turns readers off.

Most likely case? They’re going to start to ignore it.

This trend started sometime last fall, accelerated around Christmas and trickled down from major retailers to smaller shops this year. How long before ennui sets in? Email readers will see it as decoration, not something useful.

Which brings us to…

2. It’s not useful to customers.

Have you seen an animated GIF in an email designed to be useful to an email reader more than it seemed designed to attract attention?

You could argue that that’s what visuals are for: to attract attention. OK. I’m listening. And I have a soft spot for using elegant cinemagraphs in marketing.

But using an animated GIF to cycle through different colors or views of your product does not make your product look more attractive. It means you weren’t able to take one compelling photograph of your product. If you can’t sell me in a single image, what makes you think you’ll sell me in three or more?

I can hear some of you now: “Well, you can see it from all angles. That’s useful.” Well… not really. I can’t pause your GIF to take a longer look at a particular angle or zoom in for a closer one. That’s frustrating.

Then there’s the camp that says, “Well, you can see the product in action. That’s useful.” Hmm. OK. I still can’t pause your GIF or slow it down for a longer look. So we must be back to getting attention by seeing a product in action.

But is it a product customers really want to see in action?

Even if it is, could someone please tell me how those pants get back ON that guy so fast?

Other executions that aren’t particularly useful:

If you can’t justify using an animated GIF in an email for any other reason than “it looks cool” or “it gets attention,” don’t use it.

This is the most grievous sin of animated GIFs in emails.

Let’s say that you want to join the trend and you have an excellent execution plan. Your animated GIF is going grab attention subtly and be helpful and useful to your audience.

If the primary purpose of an email is to get your reader from the email to a targeted landing page — and it’s the landing page that’s optimized for conversions — your animated GIF needs to be a CTA in itself or less prominent than the email’s primary CTA.

If it’s less prominent than the CTA, or doesn’t drive email readers to click the CTA, then we’re in “What’s the point?” territory. Take this example. The animated GIF is subtle and fitting for the ModCloth brand, which is known for experimenting in emails.

But why do the lights blink up when the CTA button is down? And why is there is there a horizontal line dividing the image and the CTA? 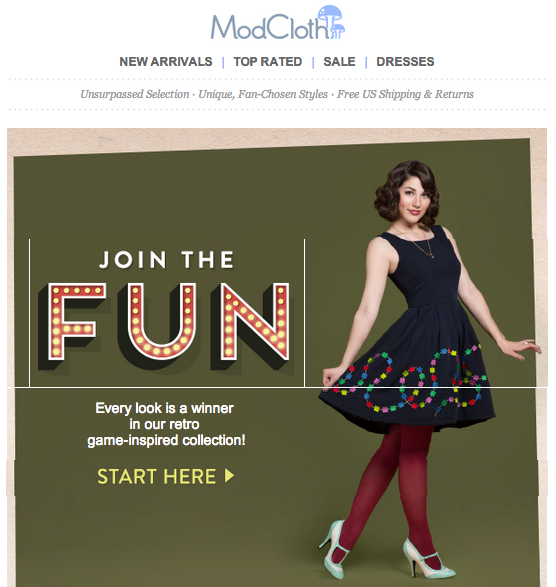 Better design choices could have made ModCloth’s animated GIF more effective at pointing people toward the email’s CTA.

How long someone spent looking at my email’s animated GIF tells me nothing (and it’s not measurable anyway). How many people clicked through and ultimately purchased my item — those are the kinds of email marketing metrics I want to report.

Make it a rule

Don’t want to worry about any of this? Simple. Never use animated GIFs in emails.

Of course, that’s easier said than done. So: